This electric motor driven car will travel at a fixed speed of about 5 miles per hour while the driver presses the foot pedal, stopping in about a car length when the foot pressure is removed.

Equipped with the battery we supply as original equipment, the car will travel about eight miles on one charging. Recharging is accomplished very easily and at nominal cost. (See instructions "TO RECHARGE BATTERY"). The running time may be extended by putting the car on charge during lunch, nap, school, etc,

The battery charge is a fixed amount of power which is used up by work done. The harder the motor has to work, the quicker the battery will be discharged. If the car is run on soft ground, grass, or up hill, it will not operate as long as if it were on a hard level surface. Similarly, it will not run as long with a 150 pound passenger as it will with a '75 pound one.

Use the best available heavy duty Group 2 GC or Group 3 6-volt battery, 140 ampere hours capacity or better. This is desirable to insure maximum running time on a charging and to reduce battery watering to a minimum. We supply as original equipment the Prestolite GC 2 Golf Cart Battery (capacity 160 amp. hours) which is specially designed for this service, (deep cycling)

2. To clamp battery in place:

Holding rear end up, fit instrument panel onto steering shaft, as close to hub of steering wheel as possible. Lower rear end of body. Tuck side

1. Insert polarized charger plug into receptacle located in the side panel in the cockpit. Plug other charger cord into any 115 volt AC outlet. Watch ammeter to make sure battery is properly connected. If battery connections are wrong, needle will travel to extreme right on dial, then return to zero, repeating this at intervals of perhaps half a minute, as the automatic circuit breaker operates. A proper connection will show a steady reading within the scale of the meter.

2. The charger operates initially at a maximum rate, then for a long period at a slightly lower rate, then drops off approximately 30% as the battery becomes completely charged. This action may be used as a convenient way to determine when the battery has been fully recharged. An appreciable drop in the "long" charging rate indicates a charged battery. Precise charging rates cannot be given, as they will depend on the local line voltage.

3. Generally, the charger should be plugged in after each use of the car and be left until the ammeter indicates the battery is fully recharged. When the battery is known to be substantially discharged the charger may be used for longer periods such as from before the evening meal until after breakfast. Overcharging should be avoided as it tends to dry out the battery and require frequent watering. A small electric light left on is a good reminder that the battery is on charge.

4. When water is needed, which will be only once in six months or more if the battery has not been overcharged, use only distilled water to assure maximum battery life.

Battery fluid, which contains sulphuric acid, is corrosive and destructive. It may be neutralized by full strength household ammonia, old fashioned bleach water, or other alkaline. Make it a practice to keep the battery clean with a rag moistened with ammonia.

Corrosion of battery terminals may be kept to a minimum by coating them with grease or Vaseline before attaching cables and by adding more grease after they are attached.

Position of the foot pedal may be changed to accomodate children of various heights. Three holes are provided in the floor boards for this purpose. Others may be drilled if needed.

1. Wheels: Each wheel has a ball bearing on each side. These may be oiled as needed.

2. Steering Mechanism: Ball bearings are located in the top and bottom of each front axle bracket; also in brackets at each end of the steering wheel shaft. These need lubrication infrequently because of the limited motion they serve. They may be taken care of with a drop or so of oil when needed.

4. Motor: The motor is a modified Ford starter motor rated at 12 volts, but using 6 volts in this application. It has sintered bronze bushings with an oil content. These should receive a drop of oil when the motor is serviced for worn brushes. A couple of drops may be applied to the bushing at the shaft end without removing the motor. Once a year should be adequate for this application.

The electric headlights and taillights are turned on and off by a pull switch on the instrument panel. In the "Firebird" and "Chief" models, there is a second switch, which controls the flashing red light. The fuze in the light and horn circuit is located in an insulated fuzed connector attached to the foot: pedal control switch.

The motor, a modified Ford starter unit, may be serviced by any service station equipped for starter and generator repair work. Brushes may be checked for wear perhaps once a year, if the car use is considerable.

The hand lever on the floor operates an electric switch with FORWARD, NEUTRAL and REVERSE positions; Forward with lever left; backward with lever right; neutral with lever in center.

The lever on the side is an emergency brake. Normally it will only be needed in descending steep grades.

To ring, lift weight on the pull-cord, then pull quickly.

These junior automobiles weigh about 190 pounds. This weight can inflict damage on other objects or the<car itself, just like a bigger vehicle. Particular care should be taken riot to run into curbs, stones or other obstacles which can inflict heavy punishment on front axles, body, etc.

WHEN WRITING THE FACTORY ALWAYS GIVE THE SERIAL NUMBER OF YOUR CAR. WE MUST HAVE THIS NUMBER TO BE SURE OF FURNISHING CORRECT PARTS. 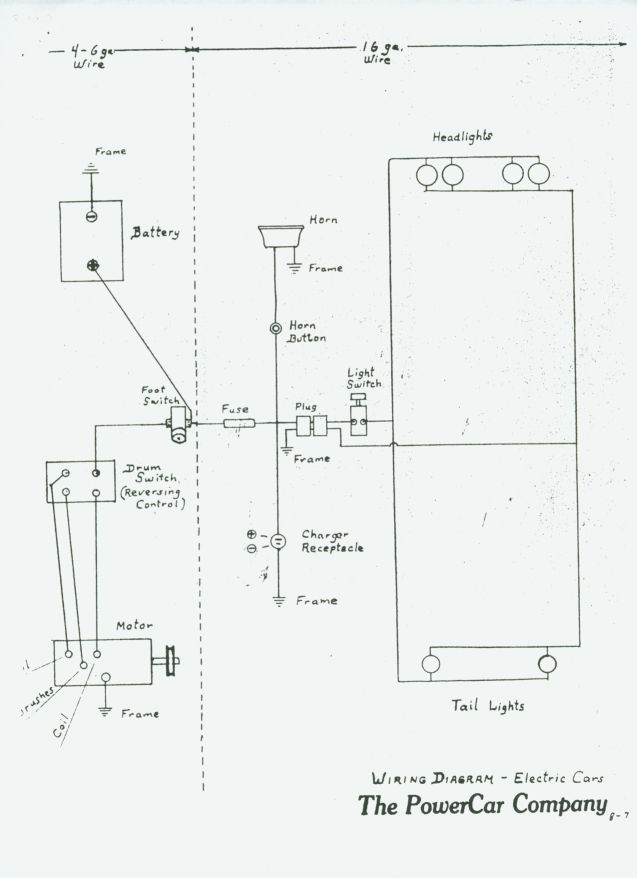